As explained into Using exposed mocks, Microcks is using Dispatcher and Dispatching Rules for finding an appropriate response to return when receiving a mock request. When importing a new Service or API, Microcks is indeed looking at the variable parts between the different samples of a same operation to infer those two elements.

However in some cases, this could not be enough and it will be useful to override these deduced values. Think about the case that you are dealing with an API operation that creates resources and that depending on the payload content you want specific different responses. The default dispatching rules would not allow to do that as Microcks does not analyse imported requests body content, nor is able to infer your business rules ;-) But you can realize that by overriding the Dispatching Rules after the first import of the API into the repository.

The need for custom dispatching rules

Let’s illustrate this with an example! Say we’ve got this API allowing to record a new beer in our own catalog. We have this POST method that allows to create new beer resources and we want to make the difference between 2 cases: the Accepted and the Not accepted responses. So we have to start describing the 2 samples into our API contract. You’ll notice in the capture below that: 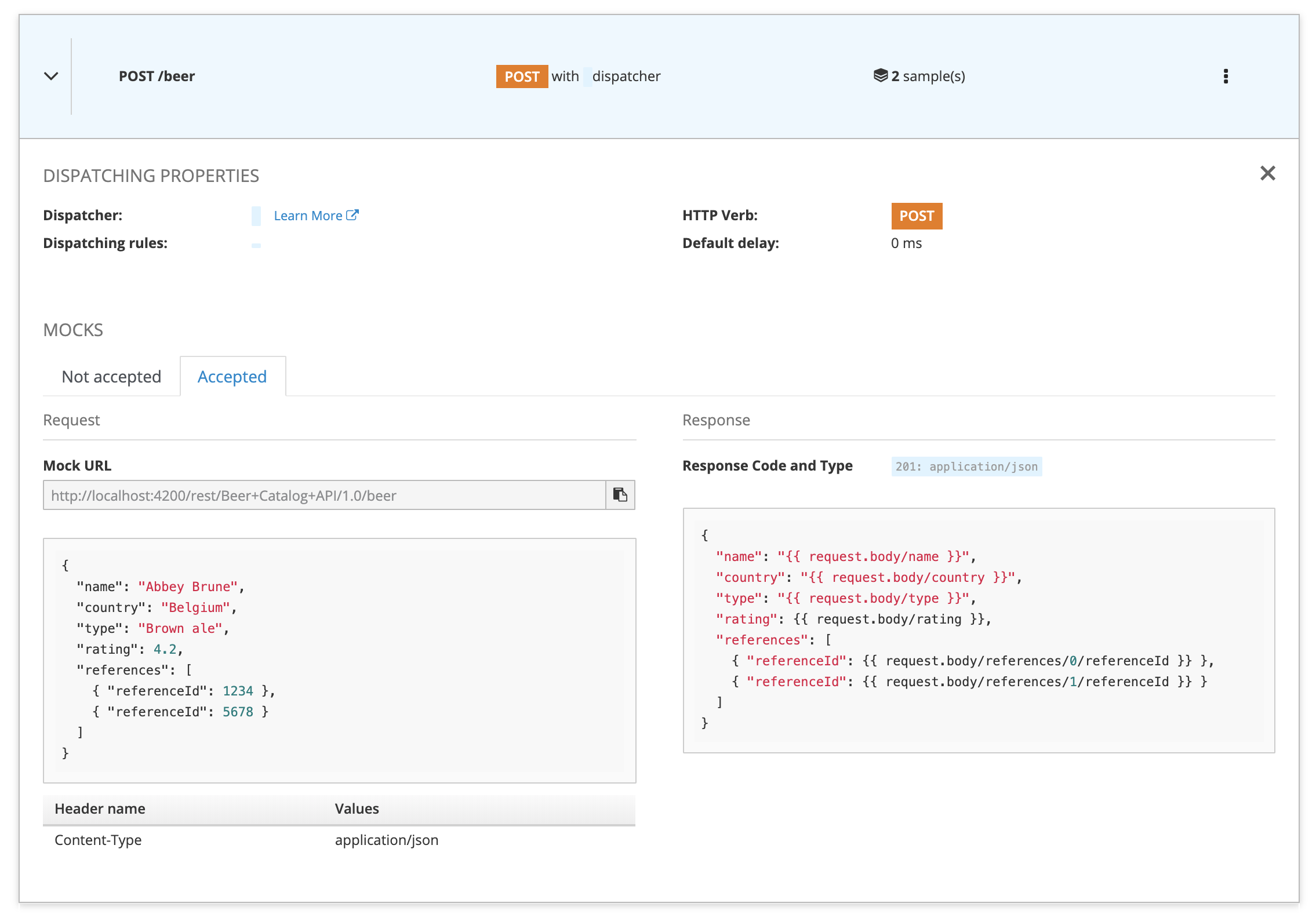 Now just select Edit Properties of the operation from the 3-dots menu on the right of the opration name. You should be logged as a repository manager to have this option (see Users management section of documentation if needed). The next screen allows you to override default operation properties, one of them being the Dispatching Rules like shown in the screen below. 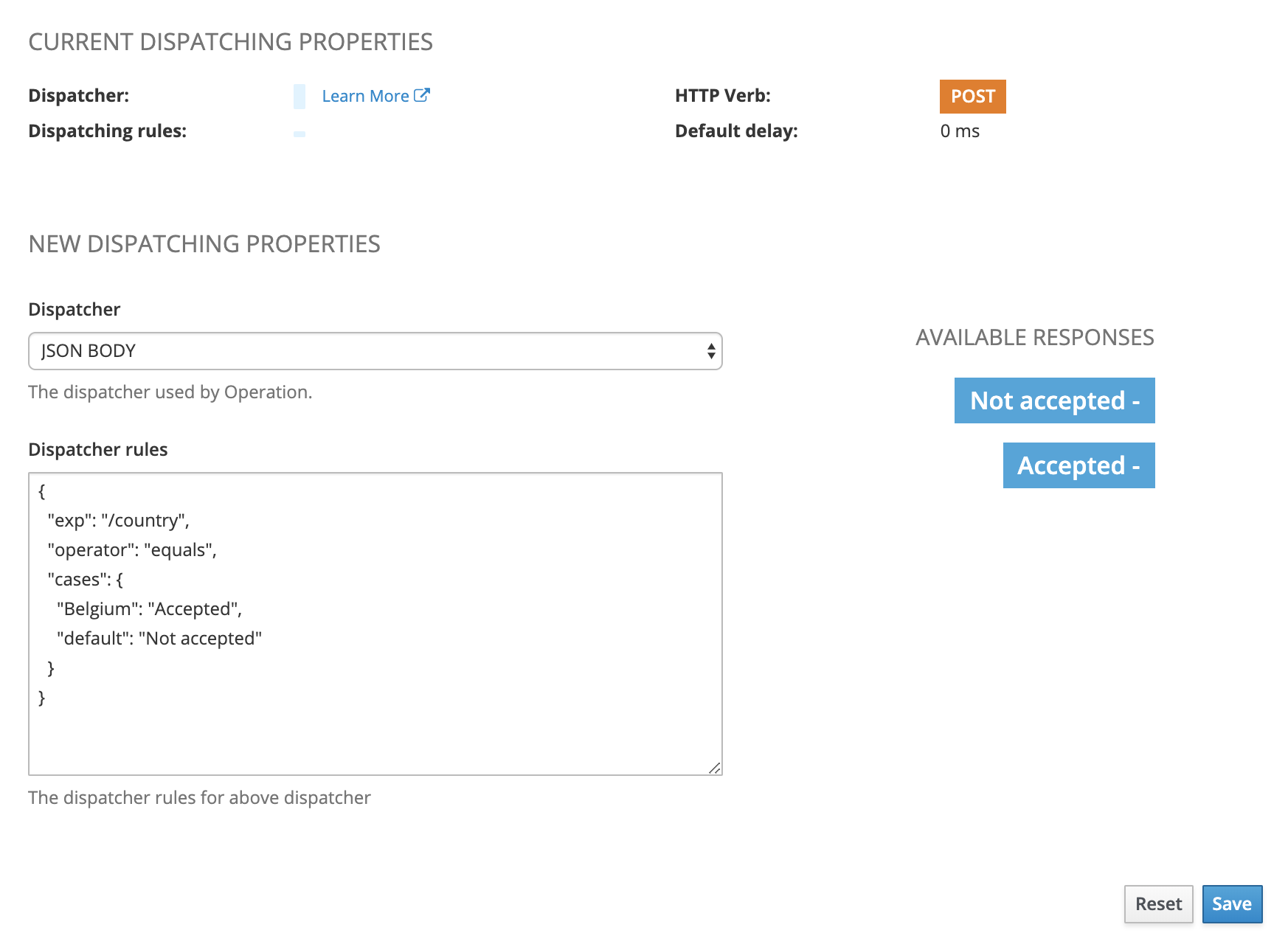 The JSON_BODY dispatching strategy allows specifying a dispatching rule that will analyse the request payload in order to find a matching response. In order to specify such an expression you can use the help vertical right secion of the page that will provide examples and copy/paste shortcuts.

The dispatching rules of JSON_BODY dispatcher are always expressed using a JSON payload with 3 properties:

Depending on the operator applied, the cases may have different specification formats.

Now that we have edited or dipsatching rule and save, we can check this rule is applied to our operation. This override of rule will be persisted into Microcks and will survive future discoveries and refreshed of this API version. 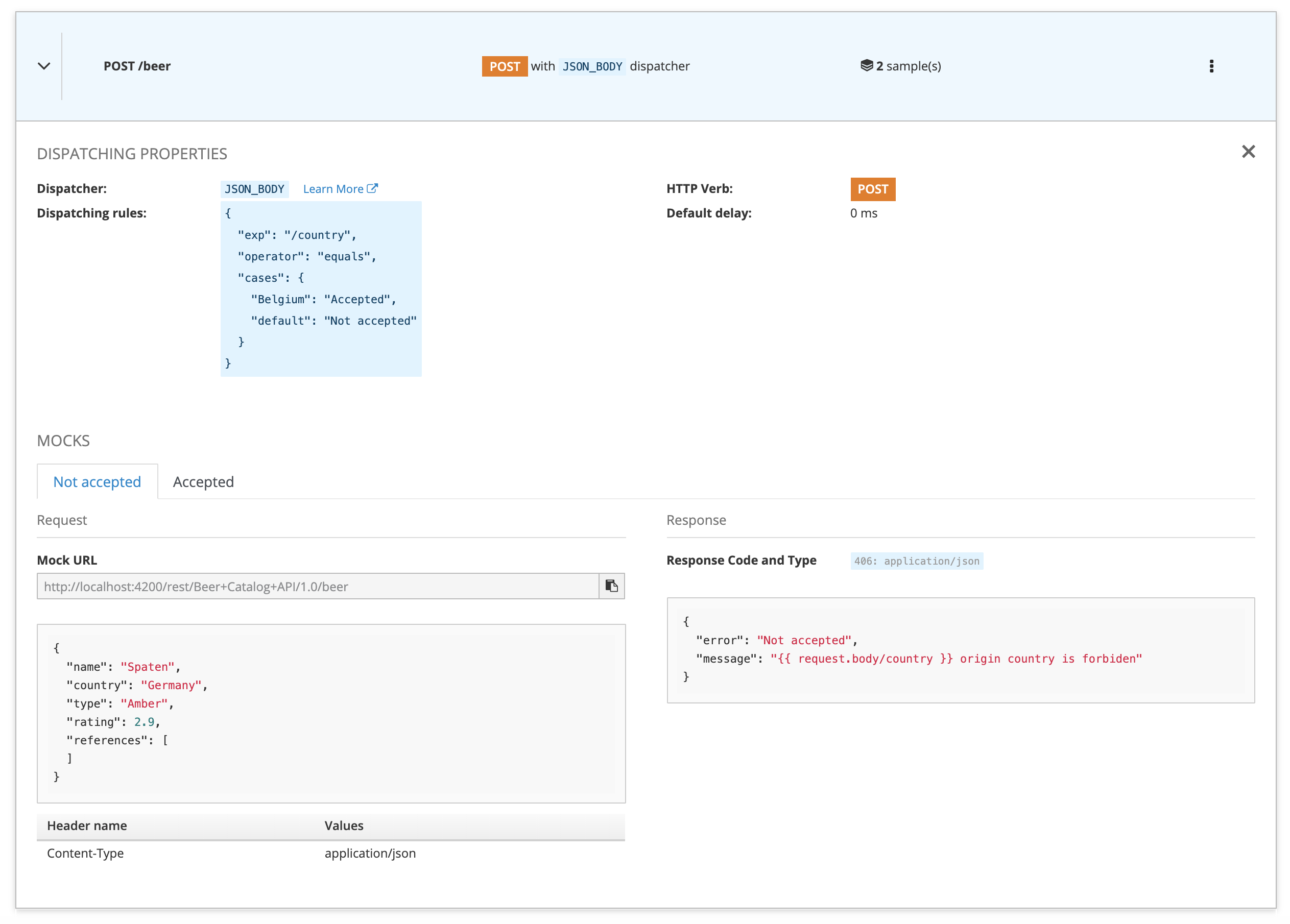 We recommend having an in-depth look at the exemple provided on the page to fully understand the power of different options.

Given the templated responses and the above dispatching rule evaluting the body of incoming requests, we can now test our mock.

Let start by creating a new beer coming from Belgium:

It is a success as the country has the Belgium value and the Accepted response is returned. Templates in this response are evaluated regarding request content.

Now let’s try with a German beer… You’ll see that the Not accepted response is matched (look also at the return code) and adapted regarding incoming request:

Another useful advanced dispatching strategy introduced in the Advanced Dispatching and Constraints for mocks blog post, is the FALLBACK strategy. As you may have guessed by its name, it behaves like a try-catch wrapping block in programming: it will try applying a first dispatcher with its own rule and if it find nothings it will default to a fallback response. This will allow you to define a default response event of the incoming requests does not match any dispatching criteria.

The dispatching rules of FALLBACK dispatcher are expressed using a JSON payload with 3 properties:

Here’s below the sample that was introduced in afore mentioned blog post. In case of unknown region requested as a query parameters on a Weather Forecast API, we’ll fallback to an unknown response providing meaningful error message: 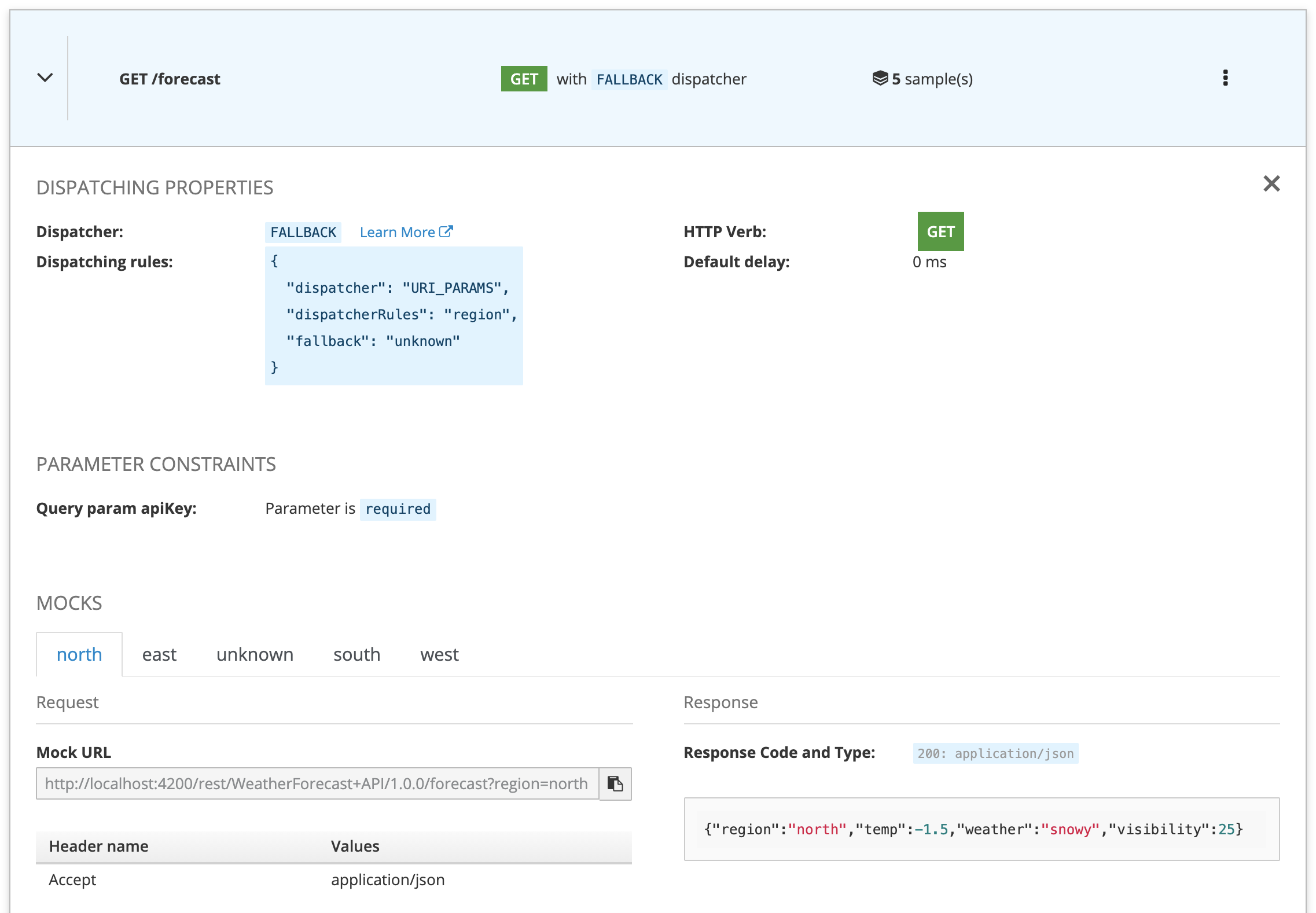 Just issue a Http request with an unmanaged region like below: