Microcks has been developed and tested with SoapUI version 5.x. It is recommend that you use a compatible version of this tool for editing your tests and mocks repository.

Steps for creating a repository

In order to create a tests and mocks repository using SoapUI, you’ll need to follow the steps below:

In order to be correctly imported and understood by Microcks, your SoapUI project should follow a little set of reasonable conventions and best practices.

We recommend having a look at our sample SoapUI projects for SOAP WebServices and for REST APIs to fully understand and see in action those conventions.

The screenshot below shows how to add a WSDL to an existing empty project : 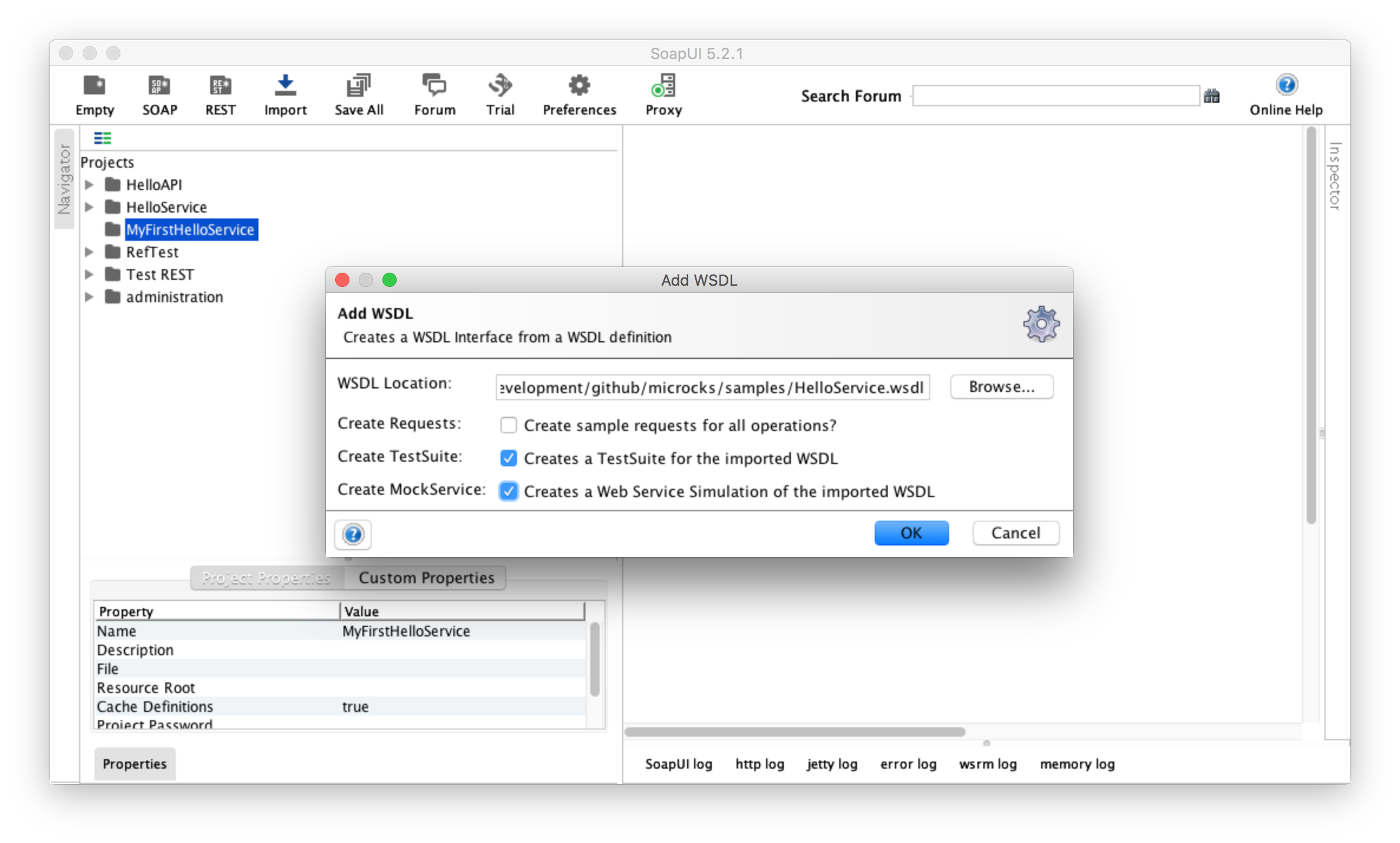 The sample requests that are used by Microcks are indeed SoapUI TestSuite requests. So select the newly imported Service, right-click and choose Generate TestSuite. You should get this following screenshot where you select these options, validate and then give your TestSuite a name like "<Service> TestSuite" or something: 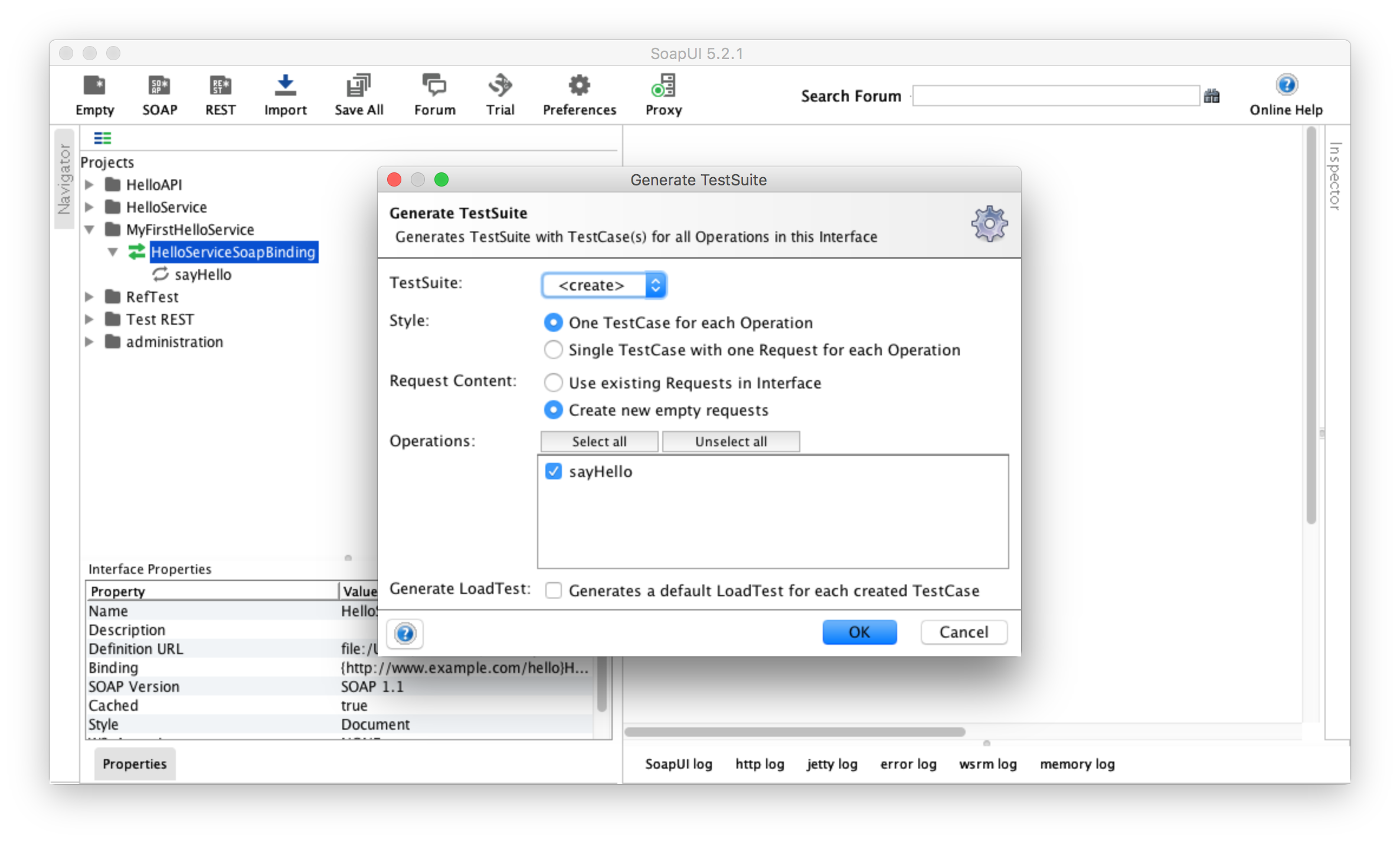 You are now free to create as many TestSteps as you want within the TestCases. TestCases represents the Operation level and TestSteps represents the request sample level. The screenshot below shows how we have created 2 sample requests (Andrew and Karla) for the sayHello operation of our WebService: 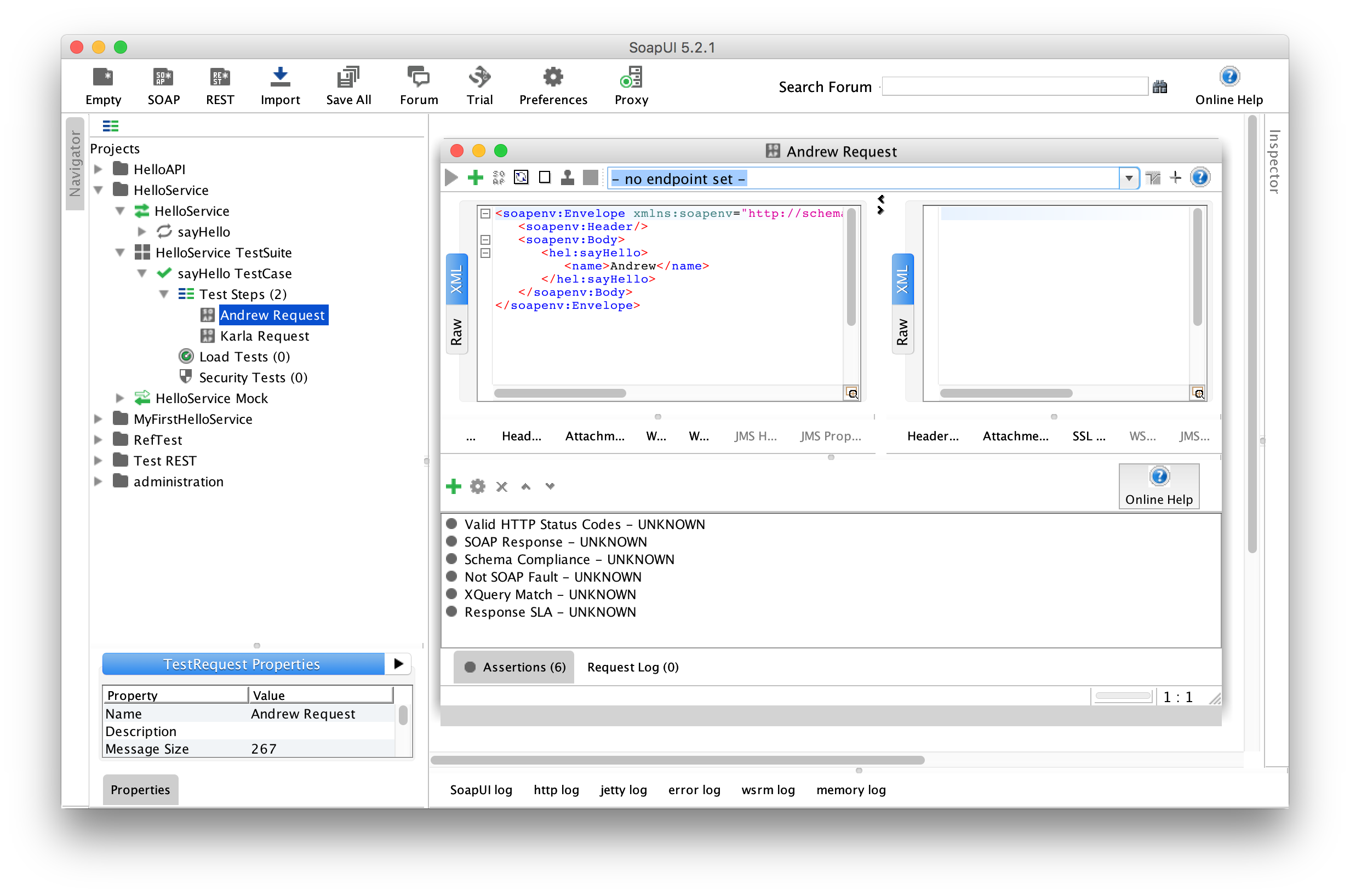 As shown above, you are also free to add some assertions within your TestStep requests. The SoapUI documentation introduces the assertion concept on this page. Assertions in TestSteps can be later reused when wanting to use Microcks for Contract testing of your Service.

Mock Responses you will need to define later will be defined through a SoapUI ServiceMock. You have to select the newly imported Service, right-click and choose Generate MockService. You can let the default options as shown below and give your MockService a name like "<Service> Mock": 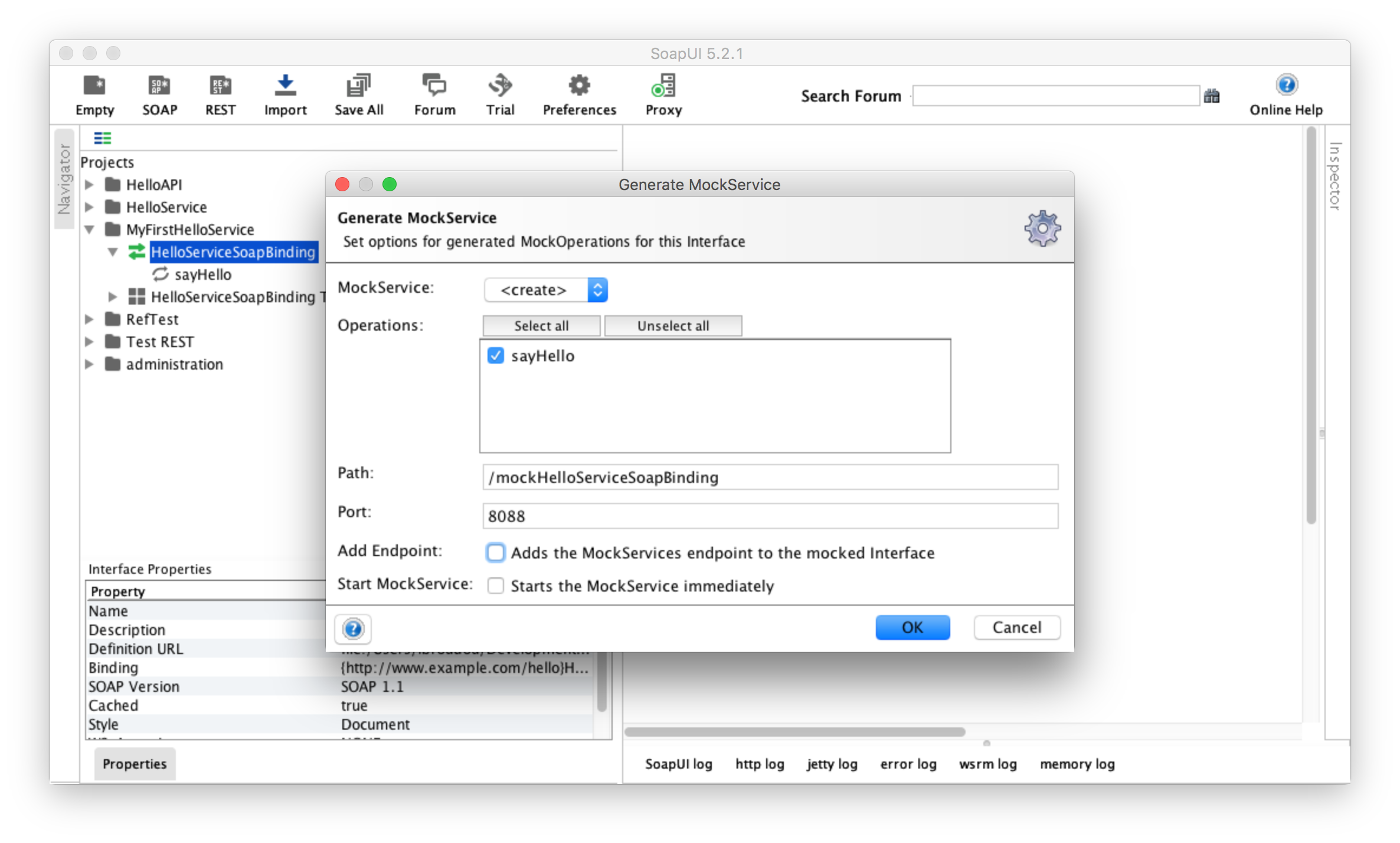 You will now be able to create as many Responses attached to Operation as you’ve got samples requests defined in previously created TestSteps. As introduced into the naming conventions, your responses must have the same "&lt;sample_id&gt; radix that the associated requests so that Microcks will be later able to associate them. 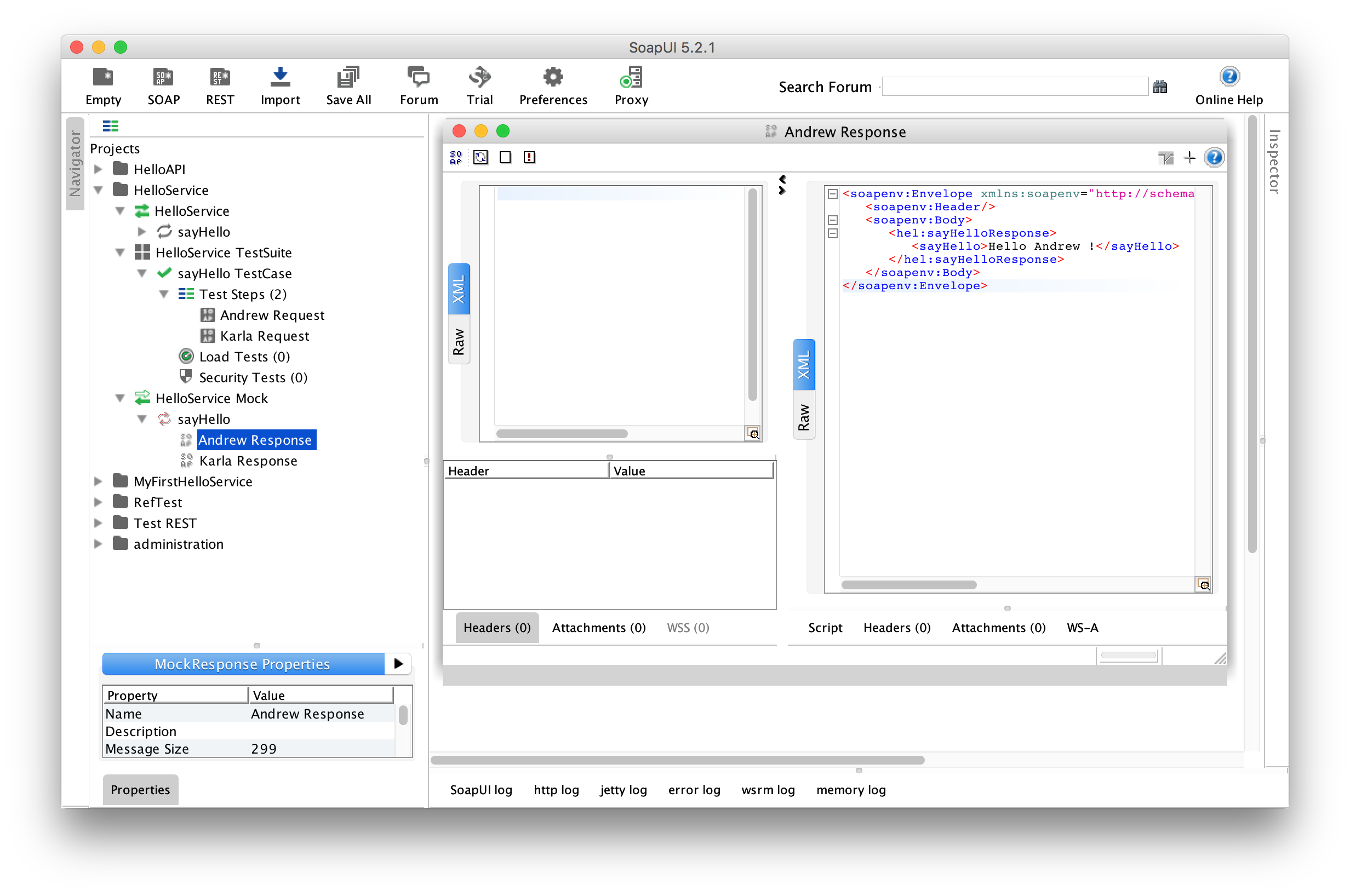 The screenshot above shows a Mock response corresponding to the Andrew Request. It is simply code Andrew Response. Note that you are free to setup any HTTP Header you want for responses, Microcks will reuse them later to issue real headers in responses.

Latest step is now to define a technical mean for Microcks to analyse an incoming requests and find out the corresponding response to return. This is done in Microcks via the concept of Dispatcher that represent a dispatch strategy and Dispatcher Rules that represent the dispatching parameters. Microcks supports 2 strategies for dispatching SOAP requests:

These two strategies have equivalent in SoapUI via Dispatch configuration on each Operation of your Mock Service.

After double-clicking on the operation node of your Mock Service, a window as shown in following screenshot should appear. If you want to use XPath for matching, select the QUERY_MATCH Dispatch and associate a Mock Response (upper section) with a new Match Rule (lower left) defining an XPath assertion (lower right). You can use the Extract helper in SoapUI if you’re not familiar to XPath expression.

Below the exemple of using the name find in incoming request to find a matching response. 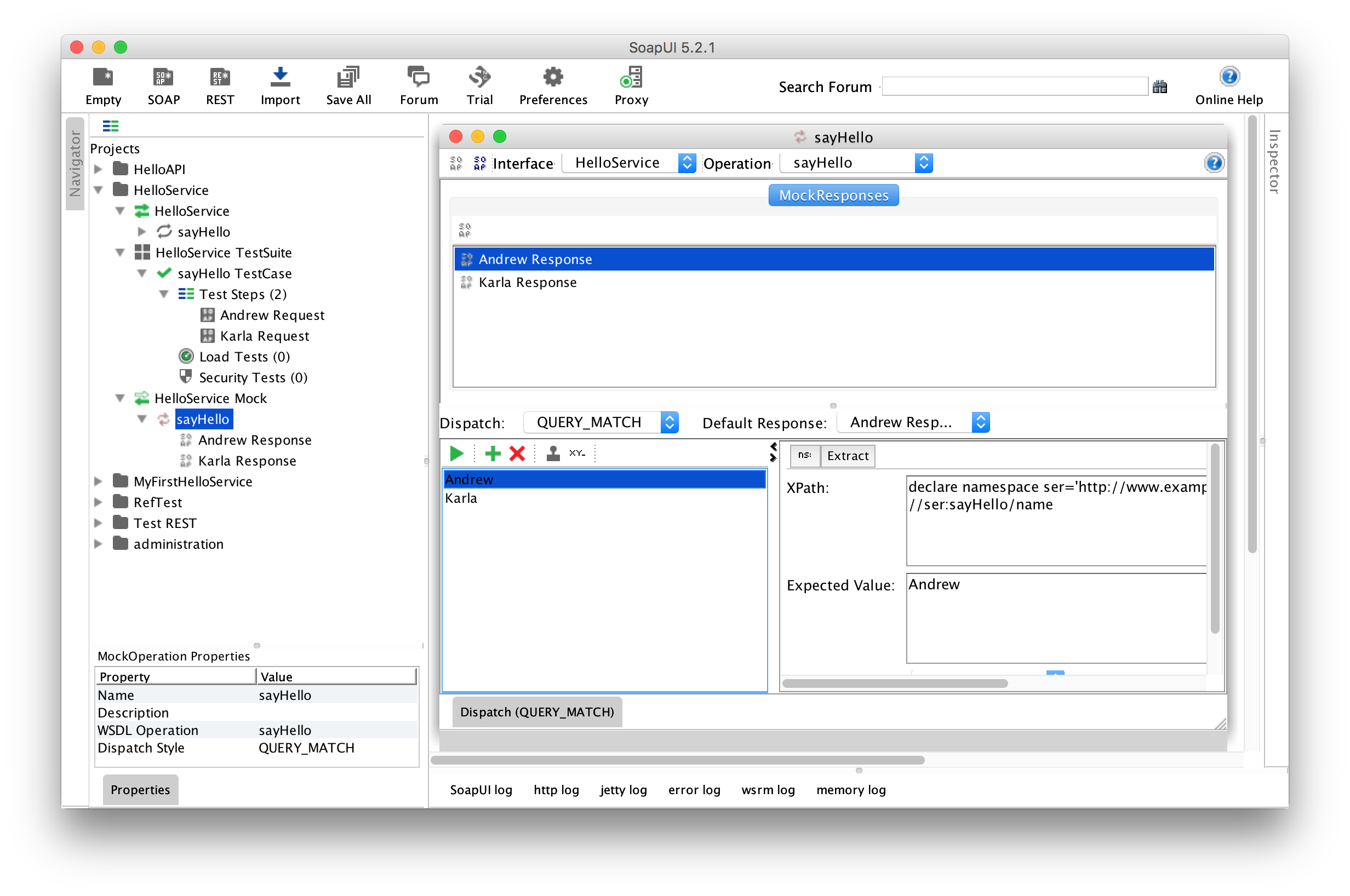 Another mean of defining matching rules is using a Groovy script. Such a script allows to define much more logic for finding a response for an incoming requests. With scripts you can use request payload but also have access to query string, http headers and so on… Groovy script are very powerful when dealing with REST services in SoapUI! 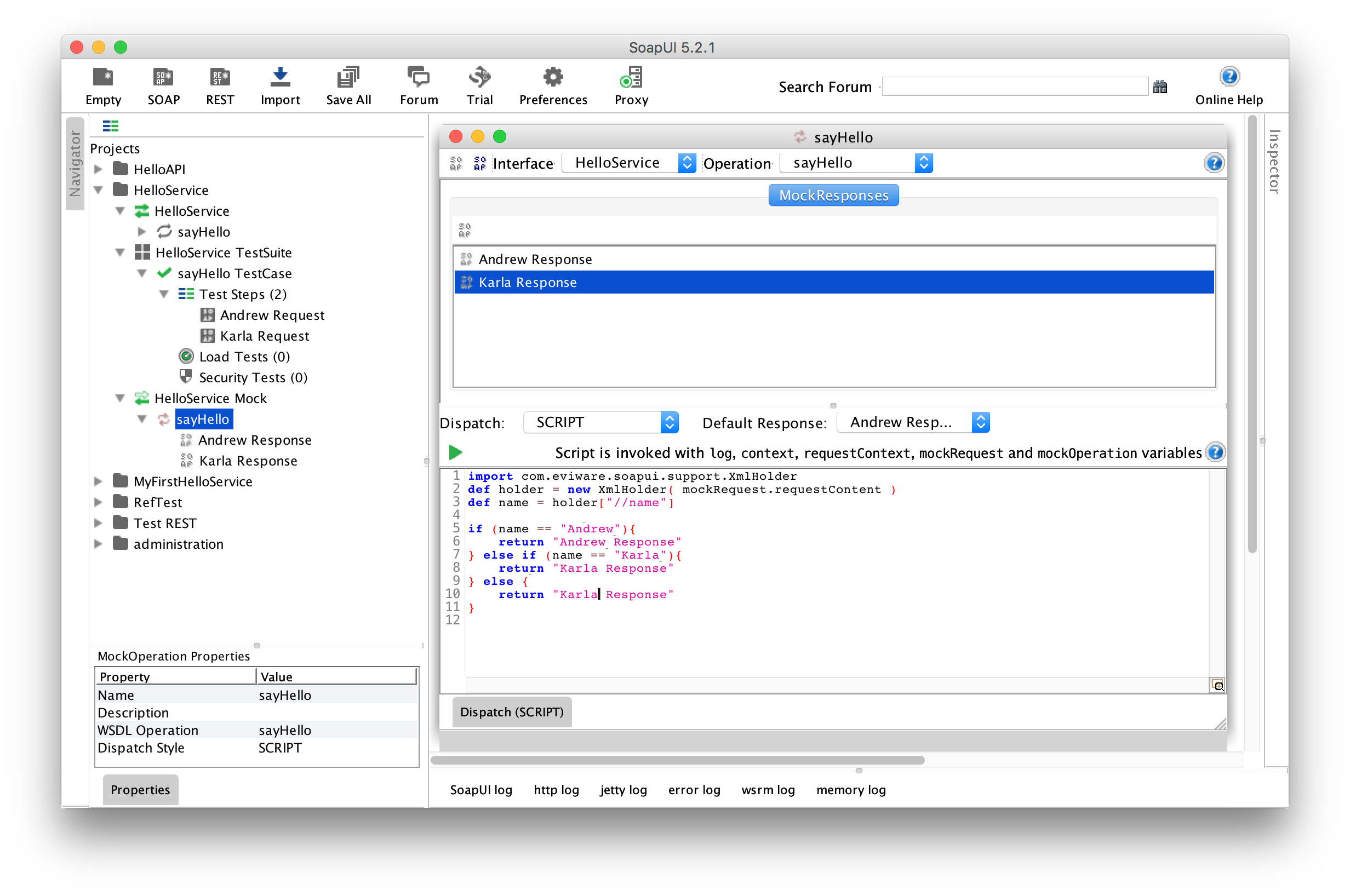 Finally, you just have to save the whole project as a SoapUI XML project file. Just put the result JSON file into your favorite Source Configuration Management tool for an easy integration with Microcks.

Do not forget to add the version custom property on your MockService object, otherwise Microcks will not be able to successfully import your SoapUI project