AsyncAPI is an open source initiative that seeks to improve the current state of Event-Driven Architectures (EDA). Its long-term goal is to make working with EDA’s as easy as it is to work with REST APIs. That goes from documentation to code generation, from discovery to event management. Most of the processes you apply to your REST APIs nowadays would be applicable to your event-driven/asynchronous APIs too. So Microcks has support for AsyncAPI too ;-) !

Starting with Microcks version 1.0.0, Microcks is now able to import AsyncAPI definitions for enriching the API catalogs with Event typed APIs. When set up accordingly, it is also able to mock the API by publishing samples messages on a dedicated message broker destination.

AsyncAPI specification decorellates the concern of message description (through payload and headers schemas) from the concern of servers and protocol bindings. A same API may have different bindings allowing to specify protocol specific issues like queue or topic naming, serialization format and so on.

At the time of 1.0.0 release, Microcks only supports the KAFKA binding. When setting up Microcks, you may have the choice deploying a new Kafka broker as part of the Microcks installation or reusing an existing broker.

With AsyncAPI Messages Objects you have the ability to define examples with your AsyncAPI specification document. For now (in the 2.0.0 release of the specification), examples is simply a [Map[ string , any]] but we ought to propose the here-after conventions as the formal specification (see this Feature request if you want to contribute to conversation).

So basically, we propose to describe examples using the following guidelines. An example may have:

We will illustrate how Microcks is using OpenAPI specification through a User signed-up API sample that is inspired yb one of AsyncAPI tutorial. The specification file in YAML format can be found here. This is a single SUBSCRIBE operation API that defines the format of events that are published when a User signed-up an application.

Sample messages are defined within your specification document, simply using the examples attribute like marked below:

Examples will be an array of example objects, starting with a key that Microcks will simply use as the example name. They may include a summary attribute to provide a short description.

Payload is expressed into the mandatory payload attribute, directly in YAML or by embedding JSON. In our illustration, we will define below 2 examples with straightforward summary:

You can see here that we’re using specific {{ }} notation that involves the generation of dynamic content. You can find description of the now() and randomString() functions into Function Expressions documentation.

Headers are expressed into the optional headers attribute, directly in YAML or by embedding JSON. In our illustration, we will define below 2 examples using both methods:

When you’re happy with your API design and example definitions just put the result YAML or JSON file into your favorite Source Configuration Management tool, grab the URL of the file corresponding to the branch you want to use and add it as a regular Job import into Microcks. On import, Microcks should detect that it’s an AsyncAPI specification file and choose the correct importer.

Using the above User signed-up API example, you should get the following results: 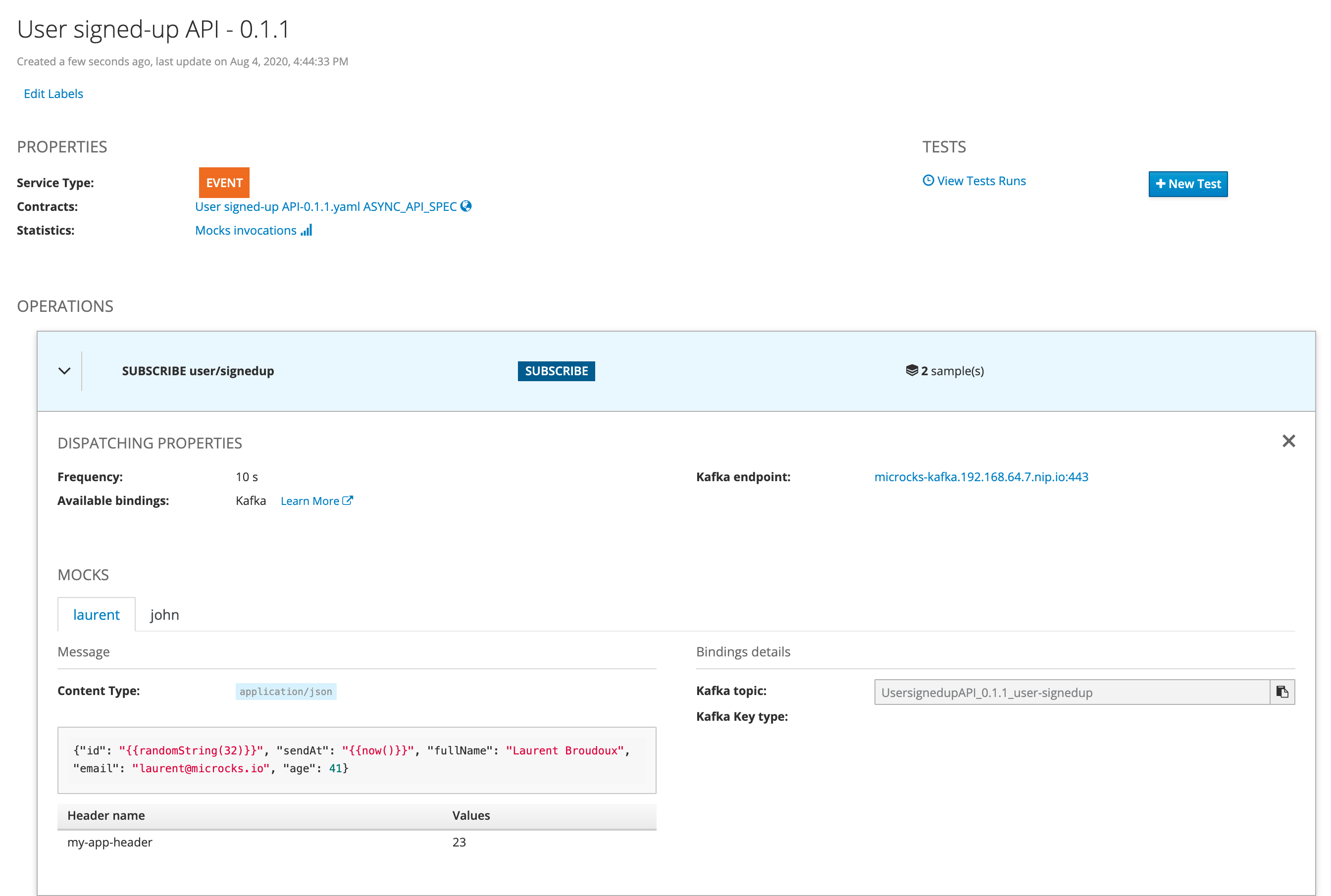